Why I don't dye my gray hair

About a month ago, I met a woman at church in the row behind me in her 50s or 60s.  She was cute with a short, very bleached-blonde head of hair.  We introduced ourselves and engaged in small talk until she suddenly interjected:

"Can I ask you a question?"

"Why do you have gray in your hair?"

(a bit stunned, I took a moment to collect my thoughts)

"Well...uh...I'm in my 30s and this is just my natural hair.  And I'd actually be willing to bet that there are a bunch of other women in this room right now who are close to my age who also have gray hair.  I'm just the only one who hasn't covered it up!"

That's about all I could come up with on the spot, having never been asked this question before.  Why is my hair gray?  Is it time for a science lesson??  The conversation ended rather abruptly after some backpedaling on her part, not before leaving me wondering if some of that bleach had perhaps absorbed through her scalp...

Before I continue with the story of this conversation's aftermath, here's the expanded backstory of my own hair.  I started sprouting a few gray strands in my late 20s.  At first, I just plucked most of them out.  At around age 30, with pressure from my hair dresser, I dyed it all over, with a plan to occasionally touch up the roots.

It was uncomfortable, unpleasant experience.  I hated the smell of the dye, which felt like it was burning my nasal passages.  I didn't like the way my hair and scalp felt afterward.  I also didn't like the price tag.  At the time, this was a compelling enough case to abandon the root-touch-up plan.  After all, I didn't have a whole lot of gray, just a few strands at the top and back.  I haven't dyed since.

But at 34, I now have more, longer gray strands, with new ones sprouting all the time.  My surprise conversation with the bleachy church lady* last month prompted me to think about two things.  First, I was inspired to sit down and articulate all the reasons why I don't dye my hair.  I wanted a good answer if this question ever came up again!

Here are some of my reasons:

My second realization from the conversation with bleachy church lady* was that I don't personally know any women my approximate age who show their gray hair.  Not a one.  So first, I did a little fact-checking:
So, I know there are ladies my age out there with gray hair!   And there MUST be some that show it.  Where on Earth are they???

On the internet, of course!

A google search turned up a few blogs from women who had stopped dying their hair.  A couple of them mentioned a Facebook group called "Gray & Proud." I clicked on over and joined.

And I'm here to tell you that I finally found my people!  Over a thousand of them, in fact.  The vast majority are women, but there are a handful of men as well.  All ages - teens to seniors.  Some went gray in their 50s, others before they hit 20.  Plenty of them are currently in their mid-30s like me.  Some have never dyed, some have dyed for 20 or 30 years.  Most went through or are currently going through a transition growing out the dye.  They post photos of their progress, "skunk stripes" and all, and cheer each other on.  Some have yet to take the no-dye plunge but are seriously considering it.  There are lots and lots of other naturally "curly girls," embracing and taking care of their hair using the same methods I do.  Curly or straight, they call each other Silver Sisters.

What is most inspiring and amazing is the overall attitude and vibe of the group as a whole.  The members are universally positive, supportive, and encouraging.  They only have kind things to say to one another (which says a lot, especially considering most comment sections of anything on the internet, ever).  They are brave, strong, and funny.  They respect each person's individual decision to dye or not dye, and do not come across as superior because they've somehow "seen the light." Rather, they have clear reasons for their choices, and encourage each other to make a choice based on what they truly want rather than some outside pressure or person.

These people get it.  And they may not know it, but they get me.


Okay, but now it's time for some brutal honesty.

Do I think some of them look much, much older with gray hair?  Honest answer: Yes.

Do I think some of them actually look worse with gray hair.  Honest answer: Yes.

But here's the problem with these answers.  Firstly, I can recognize that my brain has been programmed by our current society, culture, and patterns to think that gray = old and worse.  I can choose to resist this programming.  But even more importantly...

Let me say that again.  It just plain doesn't MATTER.

Now, let me assure you that I'm not abandoning all attempts to look nice and relatively presentable on a daily basis.  As a woman, it's fun to even dress up and feel pretty sometimes.  But accepting the natural gray that's a part of myself and encouraging others to do the same is one way I can demonstrate my belief that hair color is completely insignificant in the grand scheme of life, and also affirm my refusal to worship at the alter of youth.

Here's the last point I want to make, and it's why I wanted to write this post in the first place.  I think there are the rumblings of a movement - dare I say, a revolution - in the works.  We've been through decades upon decades of gray coverage and hiding as the norm, with only a handful of detractors.  But I think more and more women are deciding they've had enough in just the last few years, and even months.  Maybe I'm delusional or biased because I've been pleasantly brainwashed by the Gray & Proud crowd.  Is it a coincidence that a second woman at church asked me about my gray hair just last week?  Perhaps.

Oh, and here's what's happening on Pinterest, by the way... 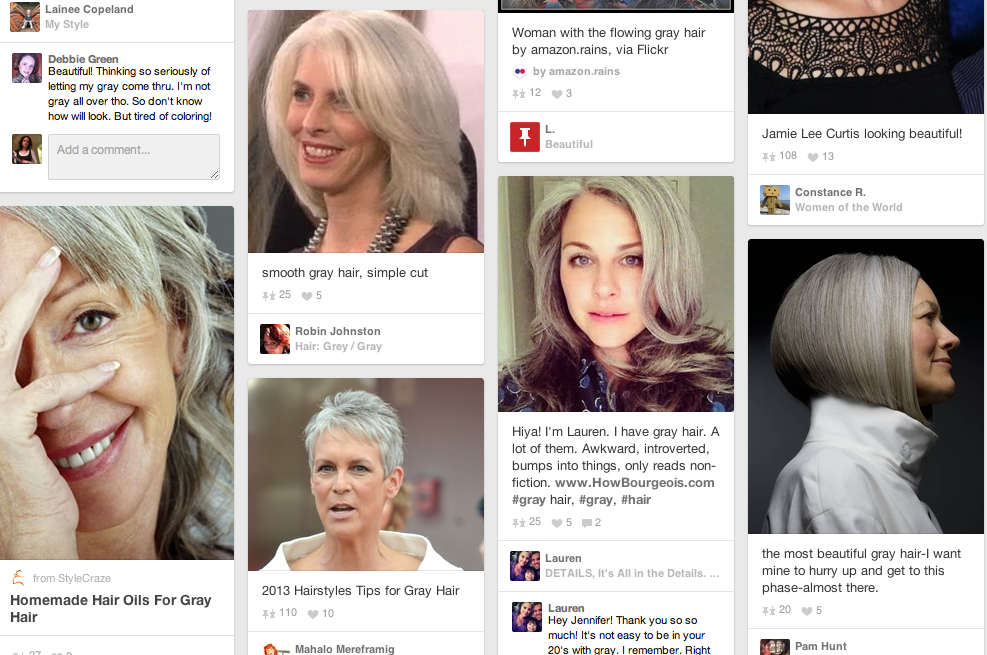 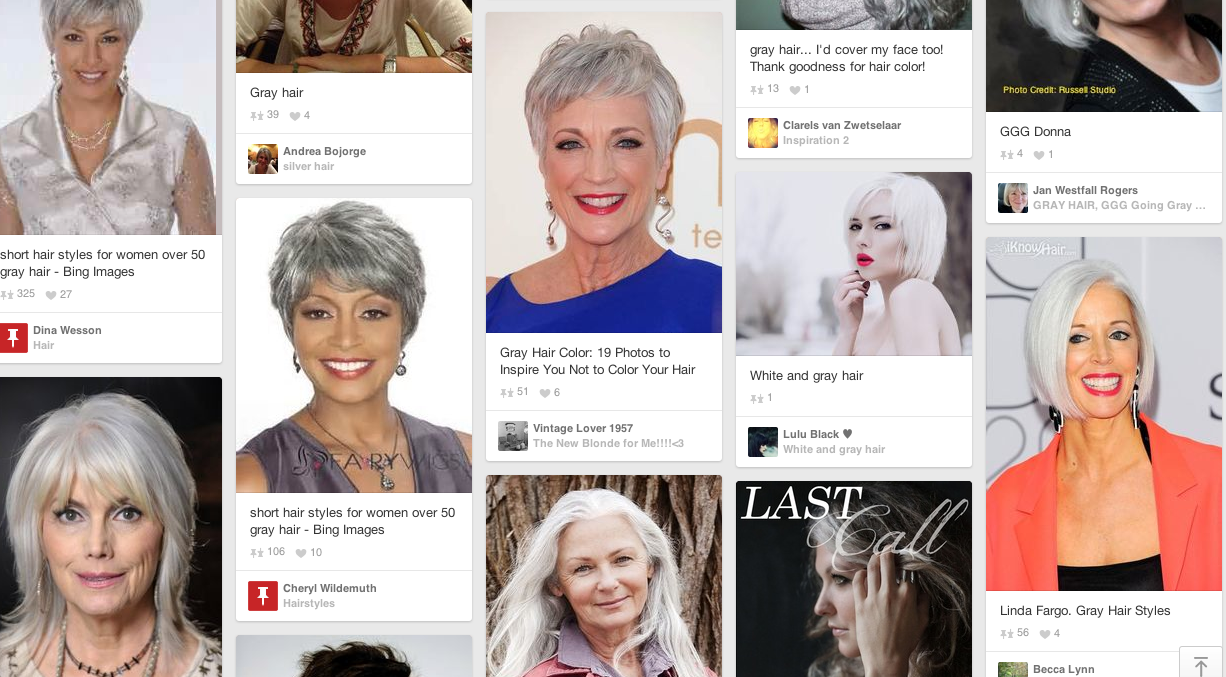 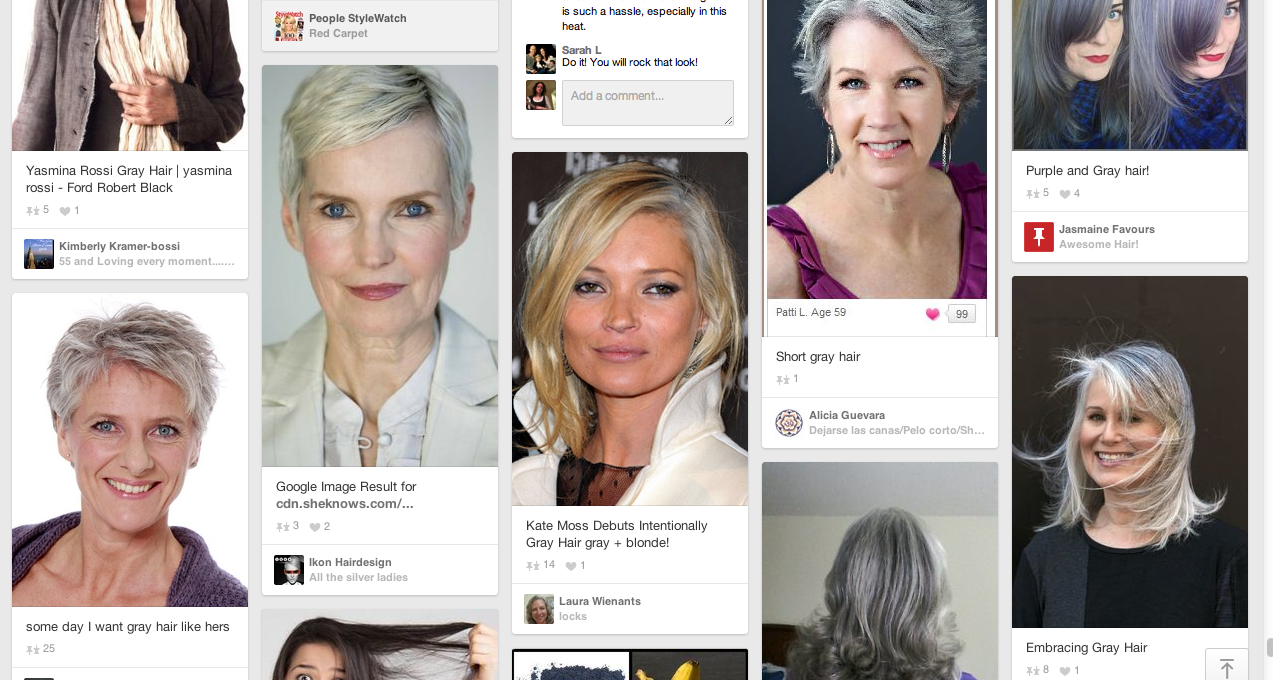 I'm here to say if you decide to go natural, you're not alone.  I'll proudly call you my Silver Sister.

*Update March 26, 2014 - Since this post was published, a friend of mine called me out on the negativity I expressed in referring to the curious woman at church as the "bleachy church lady."  I think my friend was right in doing so - it was unkind of me.  My husband had actually made a comment to the same effect earlier, but less directly.  I should have taken the hint.

Although I was a bit miffed at the way the woman asked the question, I was mostly using the term for effect--to write something catchy and to call attention to the irony of the contrast between her own hair and the way she questioned me about mine (even though it was probably just innocent curiosity that came out badly).  In retrospect, I realize it was too abrasive, condescending and unkind of me to give her this nickname and basically tease her, assuming she'd never actually READ it.  This is wrong and I apologize.  Whether or not she had bleached hair, her question sparked me to examine and clarify my thoughts.  I'm actually quite grateful to her for inspiring me!

It's sobering to remember that I'm not immune to embarrassing, self-induced irony.  I said in the post that kindness and grace and forgiveness MATTER.  I know I fail at these every day and need them as much as the woman at church or anyone else.  I'm leaving the reference in the post, and this apology to go with it, as a concrete reminder.

I'd love to know what you think!

My Cup of Tea - Books

My Cup of Tea - Blogs